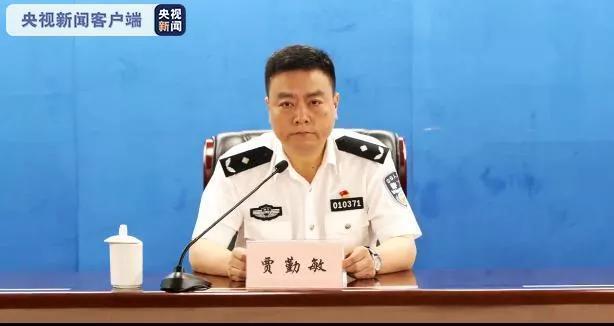 Jia Qinmin, deputy chief of the Hangzhou public security bureau, briefs the media about the killing of a woman in Hangzhou on July 25. (Photo: CCTV)

"It's always the husband"－a line from US television series Major Crimes－became a hotly searched tag on China's Sina Weibo social media platform over the weekend as netizens discussed the alleged killing and dismemberment of a woman in Hangzhou, Zhejiang province.

But forensic expert Qin Ming said in a Weibo post that a real-life criminal investigation is far more rigorous and strenuous than in TV dramas and requires sufficient evidence when tracking down and locking up criminals.

A thorough criminal investigation and the smart policing intelligence system played vital roles in uncovering the killing of the woman, surnamed Lai, who was missing for 20 days, Hangzhou police told a news conference on Saturday.

The suspect, a 55-year-old Hangzhou man surnamed Xu－Lai's husband－confessed to killing his wife in her sleep on the morning of July 5 due to family conflicts, and then dismembering her body and discarding the remains around the Jianggan district residential community where they lived.

Xu has been arrested by police from the district's public security bureau.

Lai's disappearance went viral online for over a week after the surveillance cameras in the community provided no clues as to her whereabouts.

The live broadcast of Saturday's police news conference became the most-searched topic of the day, with 28.8 million netizens watching it online, data from Sina show.

"Upon hearing about the missing person case, my basic instinct told me that this was not a simple one," said Tang Weiguo, a criminal police investigator in Jianggan district.

To ensure that no clues were overlooked, the police retrieved over 6,000 hours of surveillance videos from the community and organized more than 100 police officers to check them, said Ying Zhaohui, executive chief of the Jianggan public security bureau.

The police also interviewed 1,075 residents in 379 households from six residential buildings in the community and launched a thorough inspection of the community's sewage and piping system, underground parking lots, and balconies.

"Through the City Brain Smart Policing System, we accurately locked in on Lai's home as the core area of this case, as the system showed Lai never left the building after 5 pm on July 4," said He Guoxin, head of the Hangzhou police criminal investigation detachment.

From Wednesday to Thursday, the police drained the septic tank of the residential community, where human tissue was found. DNA comparison showed the tissue came from Lai.

Thirty-eight truckloads of sewage were rinsed and checked.