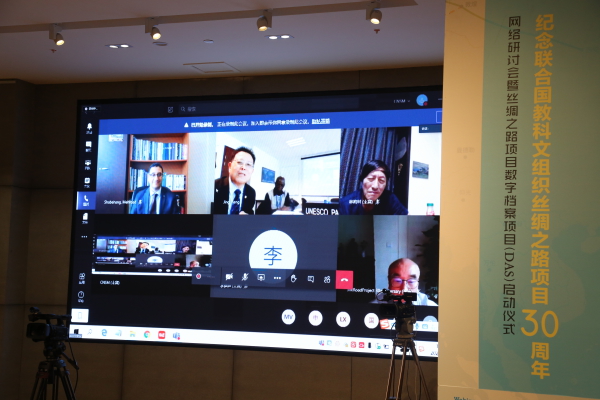 This webinar has brought together renowned international and national experts who have participated in and studied the Silk Roads Programme to share their knowledge and expertise on Silk Roads civilization.

During the webinar, Shen Yubiao, Director at National Commission of China for UNESCO firstly made a brief introduction about China's active engagement in the establishment of UNESCO's Silk Roads Project and China's cooperation with UNESCO in the building of "Belt and Road Initiative". Seeing the rising racism, xenophobia, shirking responsibility and groundless accusations among countries amidst the COVID-19 crisis, Mr. Shen said that the global significance of the Silk Roads civilization in terms of intercultural communication could further help people to arouse their deep feelings of cooperation and thus, encouraging solidarity to jointly fight against this global health crisis.

An important agenda of the webinar was to launch the Digital Archive of the Silk Roads Project, which the International Institute for Intercultural Dialogue on the Silk Roads plans to establish.

This project, on which participants are invited to provide professional advice and guidance, will establish a digital archive for the series of expeditions organized within the framework of the UNESCO initiative "Integral Study of the Silk Roads, Roads of Dialogue" carried out between 1988 and 1997. As part of the framework of this project five major expeditions were undertaken between 1990 and 1995, including; Desert Routes from Xian to Kashghar, China; the Maritime Routes between Venice, Italy and Osaka, Japan; the Steppe Routes in Central Asia; the Nomad Routes in Mongolia; and the Buddhist Routes in Nepal.