On June 24th, the closing ceremony of "2020 Silk Road Week" was jointly held by the National Cultural Heritage Administration and People's Government of Zhejiang Province in the Zhejiang Sci-Tech University.

At the beginning of the ceremony, the new Book "Chinese Silk on Russian Military Flags in Swedish Collection" was officially launched. Chief editor of the book Zhao Feng and Yuan Yachun donated the book to the Library of Zhejiang Sci-Tech University, hoping that the book could help to popularize the silk culture to more readers. Associate chief editor of the book, Su Miao introduced the overview of Chinese silk collections in Swedish museums, the historical background of the Chinese silk used for the Russian military flag, the variety and craftsmanship of Chinese silk fabrics, the analysis of dyes, pattern art and the compilation process of the book. The author team conducted an artistic and technical analysis of the silk fabrics used in more than 300 Russian military flags of Peter the Great time in the Swedish Military Museum, including a general observation of the fabrics and analysis of 167 silk patterns, etc. They also carried out classification, skeleton research, and pattern restoration, and structure analysis. The research articles in the book come from different scholars in China, Sweden, and Russia. The themes of the article include human history, silk weaving skills, and aesthetic research. The book not only provides a new perspective for the study of the relationship between Chinese Silk and the Silk Road in the late Ming and early Qing dynasties but also stands as an important part of the study of the overseas collections of Chinese silk. Yuan Yachun, the chief editor of Zhejiang University Press, said that in recent years, Zhejiang University Press has continuously explored the theme of Chinese silk and the Silk Road, and has made some achievements through publication in various fields such as "Dunhuang Studies by Zhejiang Scholars", of which more than 20 books in three series have been published so far. There are also popular culture books like "The Silk Roads: A New History of the World", "Silk Road Talking about Silk", "A short history of the Silk Road". In Cooperation with Dunhuang Research Academy, we also published "Mogao Grottoes Meets Angkor Wat", "Exploring Yulin Grottoes", "Study on Dunhuang Paintings".

Meanwhile, based on strategic cooperation with China National Silk Museum, Zhejiang University Press has strengthened its efforts in the field of Chinese silk and has so far published more than 20 academic monographs like "Road of Silk: Chinese silk and silk road", "Chinese Costume: An evolution of Fashion", "Ornamental Patterns from Ancient Chinese Textiles" etc. In 2020, latest publications in cooperation with China National Silk Museum include "The Qianlong Palette: The Research on Dyes in the 17th—19th Century Textiles and Reconstitution of the Qing Dynasty Colors", "Memory Impression: The Late Qing's Textiles from the Early World Expositions (1895—1900)", "From Soul onto Hands: Training of Handcraftsmanship in Museums".

In the historical Silk Road, cultural exchanges have always been closely integrated with trade and commerce. Chinese culture and the cultures of the countries along the route collide, attract, inspire, and learn from each other. Zhejiang University Press is willing to join hands with all parties to make efforts and contributions to study Chinese silk, protect Chinese silk and silk road heritage, transmit silk road civilization, promote cultural exchanges, and strengthen mutual learning among civilizations. 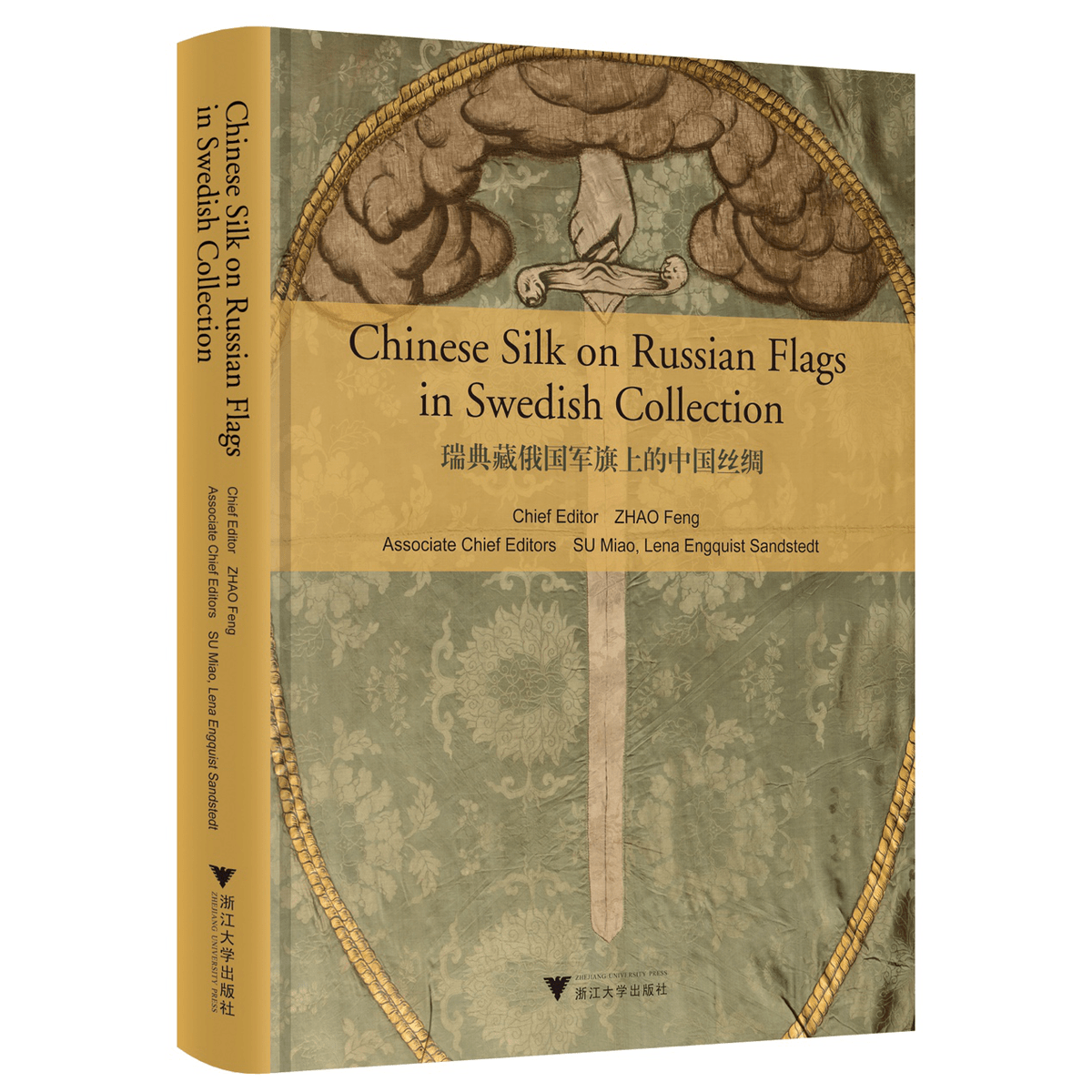 This book makes an in-depth investigation and analysis of the art and technology of Chinese silk used on more than 300 Russian military flags in the Swedish Army Museum, and classifies, restores, and studies the silk patterns on them. This book was co-written by Chinese, Swedish, and Russian experts. It is mainly composed of research articles, pattern analysis, military flag cataloging, and so on. “Part 1 Articles” includes the culture and history, general introduction, silk weaving techniques, and artistic characteristics of Russian military flags in Swedish collection. There are 5 articles in total. “Part 2 Patterns” includes complete and partial pictures of the cultural relics of 127 Russian military flags in Swedish collection, as well as their pattern restoration pictures and the corresponding research and analysis texts. “Part 3 Flags” is a catalog composed of data such as making time, discovery site, and using time, fabric size, and pattern. This book has more than 400,000 words and more than 900 pictures.

Chief Editor: ZHAO Feng is the Director of the China National Silk Museum (NSM) in Hangzhou, the Founder and the President of the International Association for Study of the Silk Road Textiles (IASSRT), the Founder and the Director of the Chinese Center for Textile Identification and Conservation (which is now the Key Scientific Research Base of Textile Conservation of State Administration of Cultural Heritage of China), the Dean of the International Institute of Silk, under Zhejiang Sci-Tech University. He has published more than 10 academic books and 100 research articles, including The General History of Chinese Silk, editor in chief, first National Publication Award, 2007; Chinese Silks, editor in chief for the Chinese version, the R. L. Shep Ethnic Textiles Book Award, 2012; and A Comprehensive Research on Textiles from Dunhuang in the UK, French and Russian collections, 2007 till now.

Associate Chief Editor: SU Miao, Doctor, Associate Professor, is the Vice Head of College of Textile Science and Engineering (International Institute of Silk) in Zhejiang Sci-Tech University (ZSTU), and the Vice Director of the International Center for Silk and Silk Road Research ZSTU (ICSSRR). She did researches at the Armémuseum (the Swedish Army Museum) of the National Swedish Museums of Military History, and the Danish National Research Foundation’s Centre for Textile Research in 2014. In recent years, she has published more than 20 research articles, 2 academic books and 4 catalogs. She has presided over several research projects and won the honorary title of the first five-star young teacher in Zhejiang Province.

Associate Chief Editor: Lena Engquist Sandstedt has worked as a textile conservator in the Swedish Army Museum with a special focus on the National Swedish Trophy Collection and flag conservation since 1987. She got her Bachelor of Arts in History of Art, Archaeology, and Romance Languages (French and Italian) from the University of Lund, and Bachelor of Arts in Textile Craft Education and Textile History from the University of Uppsala. She also took part in the preservation project of the Star-Spangled Banner in the National Museum of American History (Smithsonian Institution) in Washington D. C. in 2001-2002.